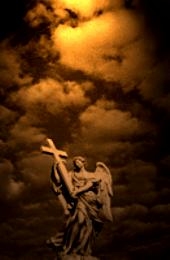 The sixth angel sounded his trumpet, and I heard a voice coming from the horns of the golden altar that is before God. It said to the sixth angel who had the trumpet, “Release the four angels who are bound at the great river Euphrates.”
And the four angels who had been kept ready for this very hour and day and month and year were released to kill a third of mankind. The number of the mounted troops was two hundred million. I heard their number.The horses and riders I saw in my vision looked like this: Their breastplates were fiery red, dark blue, and yellow as sulfur. The heads of the horses resembled the heads of lions, and out of their mouths came fire, smoke and sulfur. A third of mankind was killed by the three plagues of fire, smoke and sulfur that came out of their mouths. The power of the horses was in their mouths and in their tails; for their tails were like snakes, having heads with which they inflict injury.
The rest of mankind that were not killed by these plagues still did not repent of the work of their hands; they did not stop worshiping demons, and idols of gold, silver, bronze, stone and wood idols that cannot see or hear or walk. Nor did they repent of their murders, their magic arts, their sexual immorality or their thefts.”

Father, the hour has come. Protect your children.