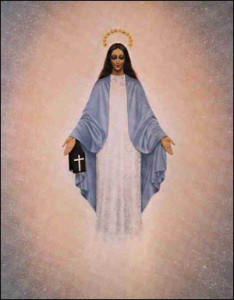 Our Lady of Garabandal

( As of 9/2015 Garabandal is still not an approved apparition of the Church – everything Seen, Said and Done should be discerned with the Holy Spirit’s guidance.)

THE POSITION OF THE CHURCH – NO OFFICIAL STATEMENT

There has been no official statement, issued from Rome, regarding the Church’s opinion on the events of Garabandal.
The Church wisely and prudently withholds her opinion until all that has been prophesied takes place. It is rare for apparitions to be strongly endorsed by Rome, rather they are eventually found to be “worthy of belief”. This was the case at both Lourdes and Fatima.

The local Spanish Bishops have been predictably skeptical. This temperance is commendable as it would be rash to lend apostolic approval to an incomplete apparition. Although Our Lady has not appeared in the village since 1965, the apparition requires the occurrence of the Warning, Miracle, and the Sign left at the Pines to ratify the prophecies and conclude the events. Regarding the theological content of the Messages, in His “Official Note” of July 8, 1965 Bishop Eugenio Beitia of Santander wrote,

“We point out, however, that we have not found anything deserving of ecclesiastical censorship or condemnation either in the doctrine or in the spiritual recommendations that have been publicized as having been addressed to the faithful, for these contain an exhortation to prayer and sacrifice, to Eucharistic devotion, to veneration of Our Lady in traditional praiseworthy ways, and to holy fear of God offended by our sins. They simply repeat the common doctrine of the Church in these matters.”

Some Educational Videos on The Apparition of Mary at Garabandel

The Story of Garabandal – A VISIT FROM AN ANGEL

San Sebastian de Garabandal is a small hamlet of some 80 humble dwellings located in the Cantabrian Mountains of northwest Spain. On June 18, 1961, four girls, Mari Loli Mazon (12), Jacinta Gonzalez (12), Mari Cruz Gonzalez (11), and Conchita Gonzalez (12) were playing on the outskirts of the village when they heard a sound like thunder. Suddenly, there stood before them a dazzling angel. He said nothing and quickly disappeared. Pale and visibly shaken, the four girls ran to the village church and the apparition soon became known. Over the next twelve days, the angel appeared to them several more times and then on July 1, he spoke for the first time, announcing that on the following day, the Blessed Virgin would appear to them as Our Lady of Mount Carmel.

OUR LADY APPEARS TO THE CHILDREN 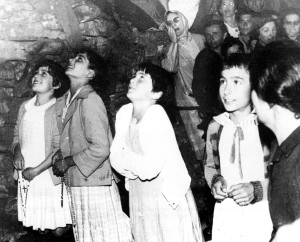 News spread quickly. On July 2, many priests were among the numerous visitors who joined the villagers to witness the great event. At about 6:00 o’clock p.m., the children were headed for the spot where they had been seeing the angel when the Blessed Virgin Mary appeared with an angel on each side. They recognized one of the angels as the one who had been appearing to them (later identified as St. Michael the Archangel) and the other looked identical. Above the Virgin was a large eye that the children thought to be the eye of God. They spoke openly and familiarly with their Heavenly Mother and said the rosary in her presence. Over the next year and a half she would appear hundreds of times frequently.

The girls’ visions were preceded by three interior calls (llamadas) each becoming stronger than the last. After the third call they would run to the sunken land where the visions first began and crashing to their knees on the jagged rocks, enter into heavenly rapture. Their heads were thrown back, the pupils of their eyes dilated and their face imbued with an angelic countenance. They were insensitive to pricks, burns, physical contact or bright spotlights shone directly into their eyes. Their weight factor changed so much that two grown men had great difficulty in lifting one 12-year-old girl and yet they could lift each other with the greatest of ease to offer a kiss to the Virgin. 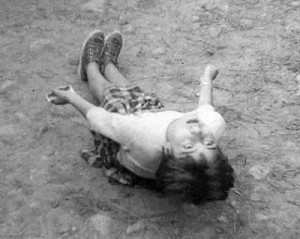 As the apparitions continued, new phenomena began to occur. With their heads thrown back and unable to see where they were going, the girls in ecstasy would march in arm, without the slightest difficulty either frontwards or backwards over very hazardous terrain and sometimes at a pace so rapid that onlookers running at full speed were unable to keep up with them. During these ecstatic “flights” they were able to stop instantly defying the laws of physics as the following crowd, like a speeding car trying to come to a screeching halt, would go right past them. Afterwards, the visionaries were neither out of breath nor perspiring and their pulse rates were normal.

The girls also began to make spectacular falls in ecstasy either collectively or individually. Sometimes they would fall straight backwards, stiff as a board, without bending any part of the body or using the hands to cushion the fall. The loud thud made when they hit the ground frightened onlookers but the visionaries were never hurt. From this prone position, they would rise without pushing themselves up in any way. In collective falls they were described by witnesses as “beautiful sculptures” and their clothing was never immodestly ruffled or indecorous.

One of the many priests to witness the events of Garabandal was Fr. Luis Maria Andreu, a young theology professor from Ona, Spain. On the night of August 8, 1961, while observing the visionaries in ecstasy, Fr. Luis cried out four times, “Miracle!” On the drive home with friends later that night and into the next morning he exclaimed, “What a wonderful present the Virgin has given me! How lucky to have a mother like that in heaven…Today is the happiest day of my life!” Shortly after pronouncing these words he lowered his head and passed from this life to the next. In a subsequent vision, the Virgin told the seers that Fr. Luis had seen her and a preview of the great Miracle and that he died of joy.

When witnesses heard that Our Lady wanted to kiss religious objects, many rosaries, medals, crucifixes and wedding rings were given to the seers to present to the Virgin . Often, the objects were given to the visionaries in such a way that they couldn’t possibly know to whom each belonged, the articles having either been placed on a table set aside for this purpose when the seers were not present or being handed to them by persons other than the rightful owners. Yet, in ecstasy, guided by Our Lady, they never made a mistake in returning wedding rings and other articles to the right person. On the Virgin’s last visit to Garabandal she told Conchita, “through the kiss I have bestowed on these objects my Son will perform prodigies…” This promise has been fulfilled in numerous reported cures from around the world.

MIRACLE OF THE VISIBLE COMMUNION 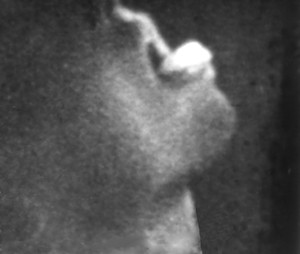 To confirm the supernatural character of the events, St. Michael told Conchita that on a certain date, the invisible Communion he had been giving her would become visible on her tongue. So, in the early morning hours of July 19, 1962, she left her house in ecstasy, turned a corner, and fell to her knees in an adjacent street. As the crowd pressed around her, she put out her tongue and those just inches away affirmed that it was bare and the mouth empty. Then, faster than the eye could see, a brilliant white Host appeared on her tongue. An amateur with a movie camera a few feet away and only flashlight illumination was able to film the last few moments of the miracle.

EVENTS HAVE NO NATURAL EXPLANATION

The visionaries in ecstasy were carefully studied by eminent doctors and psychiatrists. One child specialist certified that the girls were always completely normal and that the ecstasies did not fall under any known physiological phenomena. Dr. Ricardo Puncernau, leading Spanish neuropsychiatrist stated, “From a strictly scientific point of view, one cannot deny the possibility of a supernatural cause in all these phenomena.” Dr. Garcia Ruiz and Dr. Ortiz Gonzales said, “To keep silent would be true scientific cowardice…we do not find any convincing explanation for such phenomena.”

Three of the four visionaries have married Americans and live in the United States. They lead exemplary Christian lives totally dedicated to their vocations as wives and mothers. Conchita has four children, Mari Loli, three, and Jacinta, one. Mari Cruz is also married, living in Spain and has four children.

“As my message of October 18 has not been complied with and has not been made known to the world, I am advising you that this is the last one. Before, the cup was filling up. Now it is flowing over. Many cardinals, many bishops and many priests are on the road to perdition and are taking many souls with them. Less and less importance is being given to the Eucharist. You should turn the wrath of God away from yourselves by your efforts. If you ask for his forgiveness with sincere hearts, He will pardon you. I, your mother, through the intercession of Saint Michael the Archangel, ask you to amend your lives. You are now receiving the last warnings. I love you very much and do not want your condemnation. Pray to us with sincerity and we will grant your requests. You should make more sacrifices. Think about the passion of Jesus. ”

The Warning
Three great supernatural events were prophesied at Garabandal. The first is a worldwide Warning from God to be seen and then felt interiorly by everyone on earth. At that moment, we will see the wrong we’ve done and the good we failed to do. The Warning will be sent to correct the conscience of the world and prepare it for the great Miracle.

The Miracle
The Miracle will take place at the grove of pine trees on a bluff overlooking the village of Garabandal. It will occur on a Thursday evening at 8:30 on or between the eighth and the sixteenth of March, April or May. (Visionary Conchita Gonzalez-Keena knows the date and will announce it eight days in advance.) It will be on the feastday of a martyr of the Eucharist and coincide with an event in the Church. All those either in the village or surrounding mountains will see it. The sick who are present will be cured, sinners converted and the incredulous will believe. As a result of the Miracle, Russia will be converted.

The “Sign”
After the Miracle, a permanent visible supernatural sign will remain at the pines in Garabandal until the end of time.