Prayer to St. Michael – “Protector of God’s Loved Ones” 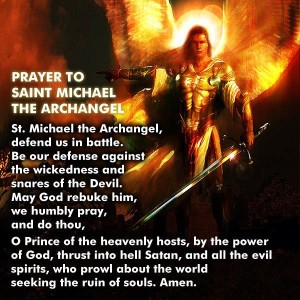 Feast Day – September 29th
“Who is Like to God”

Michael (“who is like God?”, Hebrew: מִיכָאֵל‎ (pronounced [mixaˈʔel]), Micha’el or Mîkhā’ēl; Greek: Μιχαήλ, Mikhaḗl; Latin: Michael (in the Vulgate Michahel); Arabic: ميخائيل‎, Mīkhā’īl) is an archangel in Judaism, Christianity, and Islam. Roman Catholics, the Eastern Orthodox, Anglicans, and Lutherans refer to him as “Saint Michael the Archangel” and also as “Saint Michael”. Orthodox Christians refer to him as the “Taxiarch Archangel Michael” or simply “Archangel Michael”.

Michael is mentioned three times in the Book of Daniel, but most notably with the following passage…“At that time Michael, the great prince who protects your people, will arise. There will be a time of distress such as has not happened from the beginning of nations until then… But at that time your people—everyone whose name is found written in the book—will be delivered. Multitudes who sleep in the dust of the earth will awake: some to everlasting life, others to shame and everlasting contempt. Those who are wise will shine like the brightness of the heavens, and those who lead many to righteousness, like the stars for ever and ever.” Daniel 12

In the New Testament Michael leads God’s armies against Satan’s forces in the Book of Revelation, where during the war in heaven he defeats Satan. In the Epistle of Jude Michael is specifically referred to as “the archangel Michael”.

In your own life, call upon St Michael for assistance.  The entire heavenly Army of Angel’s is under his command… by the Grace and Blessing of the Great God Almighty to assist us… and to help you personally… especially in overcoming evil and darkness in your life.

St. Michael Pray for Us

St. Michael the Archangel,
defend us in battle.
Be our defense against the wickedness and snares of the Devil.
May God rebuke him, we humbly pray,
and do thou,
O Prince of the heavenly hosts,
by the power of God,
thrust into hell Satan,
and all the evil spirits,
who prowl about the world
seeking the ruin of souls. Amen..

Original prayer to St. Michael
NOTE : The following St. Michael’s Prayer is the original version as written by Pope Leo XIII.   It is taken from The Raccolta, twelfth edition, published by Burnes, Oates & Washbourne Ltd,  publishers to the Holy See, London, 1935. It was originally published in the Roman Raccolta of July 23, 1898, and a supplement approved July 31, 1902:

O Glorious Archangel St. Michael, Prince of the heavenly host, be our defense in the terrible warfare which we carry on against principalities and powers, against the rulers of this world of darkness, and spirits of evil.

Come to the aid of man, whom God created immortal, made in His own image and likeness, and redeemed at a great price from the tyranny of the devil. Fight this day the battle of the Lord, together with the holy angels, as already thou hast fought the leader of the proud angels, Lucifer, and his apostate host, who were powerless to resist Thee, nor was there place for them any longer in heaven. That cruel, that ancient serpent, who is called the devil or Satan, who seduces the whole world, was cast into the abyss with his angels.

Behold, this primeval enemy and slayer of men has taken courage. Transformed into an angel of light, he wanders about with all the multitude of wicked spirits, invading the earth in order to blot out the name of God and of His Christ, to seize upon, slay and cast into eternal perdition souls destined for the crown of eternal glory. This wicked dragon pours out, as a most impure flood, the venom of his malice on men; his depraved mind, corrupt heart, his spirit of
lying, impiety, blasphemy, his pestilential breath of impurity and of every vice and iniquity. These most crafty enemies have filled and inebriated with gall and bitterness the Church, the Spouse of the
Immaculate Lamb, and have laid impious hands on her most sacred possessions. In the Holy Place itself, where has been set up the See of the most holy Peter and the Chair of Truth for the light of the world, they have raised the throne of their abominable impiety, with the iniquitous design that when the Pastor has been struck, the sheep may be scattered.

Arise then, O invincible Prince, bring help against the attacks of the lost spirits to the people of God, and give them the victory. They venerate Thee as their protector and patron; in Thee Holy Church glories as her defense against the malicious power of hell; to
Thee has God entrusted the souls of men to be established in heavenly beatitude. Oh, pray to the God of peace that He may put Satan under our feet, so far conquered that he may no longer be able to hold men in captivity and harm the Church. Offer our prayers in the sight of the Most High, so that they may quickly conciliate the mercies of the Lord; and beating down the dragon, the ancient serpent who is the devil and Satan, do Thou again make him captive in the abyss, that he may no longer seduce the nations. Amen.

V. Behold the Cross of the Lord; be scattered, hostile powers.
R. The Lion of the tribe of Judah has conquered, the root of David.
V. Let Thy mercies be upon us, O Lord
R. As we have hoped in Thee.
V. O Lord, hear my prayer.
R. And let my cry come unto Thee

LET US PRAY
God, the Father of our Lord Jesus Christ, we call upon Thy holy name, and we humbly implore Thy clemency, that by the intercession of Mary, ever Virgin Immaculate and our Mother, and of the glorious Archangel St. Michael, Thou wouldst deign to help us
against Satan and all other unclean spirits, who wander about the world for the injury of the human race and the ruin of souls.
Amen.

Prayer For Help Against Spiritual Enemies

Glorious Saint Michael, Prince of the heavenly hosts, who stands always ready to give assistance to the people of God; who fought with the dragon, the old serpent, and cast him out of heaven, and now valiantly defends the Church of God that the gates of hell may never prevail against her, I earnestly entreat you to assist me also, in the painful and dangerous conflict which I sustain against the same formidible foe. Be with me, O mighty Prince! that I may courageously fight and vanquish that proud spirit, whom you, by the Divine Power, gloriously overthrew, and whom our powerful King, Jesus Christ, has, in our nature, completely overcome; so having triumphed over the enemy of my salvation, I may with you and the holy angels, praise the clemency of God who, having refused mercy to the rebellious angels after their fall, has granted repentance and forgiveness to fallen man. Amen.

Litany of Saint Michael the Archangel

God the Father of Heaven,
Have mercy on us.

God the Son, Redeemer of the world,
Have mercy on us.

God the Holy Spirit,
Have mercy on us.

Holy Trinity, One God,
Have mercy on us.

Holy Mary, Queen of the Angels, pray for us.

St. Michael the Archangel, pray for us.

Most glorious attendant of the Triune Divinity,

Lamb of God, Who takes away the sins of the world,
Spare us, O Lord.

Lamb of God, Who takes away the sins of the world,
Graciously hear us, O Lord.

Lamb of God, Who takes away the sins of the world,
Have mercy on us.

Pray for us, O glorious Saint Michael,
That we may be made worthy of the promises of Christ.

Let Us Pray
Sanctify us, we beseech Thee, O Lord, with Thy holy blessing, and grant us, by the intercession of Saint Michael, that wisdom which teaches us to lay up treasures in Heaven by exchanging the goods of this world for those of eternity, Thou Who lives and reigns, world without end. Amen.
Relying, O Lord, upon the intercession of Thy blessed Archangel Michael, we humbly beg of Thee, that the Holy Eucharist in whose presence we kneel, may make our soul holy and pleasing to Thee. Through Christ Our Lord. R. Amen.

St. Michael, the Archangel! Glorious Prince, chief and champion of the heavenly hosts; guardian of the souls of men; conqueror of the rebel angels! How beautiful art thou, in thy heaven-made armor. We love thee, dear Prince of Heaven!

We, thy happy clients, yearn to enjoy thy special protection. Obtain for us from God a share of thy sturdy courage; pray that we may have a strong and tender love for our Redeemer and, in every danger or temptation, be invincible against the enemy of our souls. O standard-bearer of our salvation! Be with us in our last moments and when our souls quit this earthly exile, carry them safely to the judgement seat of Christ, and may Our Lord and Master bid thee bear us speedily to the kingdom of eternal bliss. Teach us ever to repeat the sublime cry: “Who is like unto God?”
Amen.

Johnny’s Prayer – A Thank You for St Michael and Christ

Alone, screaming in the darkness
Hopeless, cursed and wretched.
He could not seek forgiveness, for he could not forgive himself.
Despair consumed him, Darkness engulfed him… for eternity destined.

And having heard the cries of your living children
My Great God Almighty made the blackness white.

In an instant
That soul in despair, was no longer alone.
Your Light overcame the darkness
Michael and his army entered hell itself
and carried that wretched soul out – into the light of your presence.

Out of the depths of hell you seized him Lord.
You saved him. You always loved him.

Your mercy has no limits, your compassion never ending.
How Loving a father and brother, thou are.

Holy God, Holy Mighty One, Holy Immortal One, continue to have mercy on us and on the whole world. Thank You.

St. Michael, For Protection of the Church and All Her Members

O glorious St. Michael, guardian and defender of the Church of Jesus Christ, come to the assistance of this Church, against which the powers of hell are unchained, guard with especial care her august Head, and obtain that for him and for us the hour of triumph may speedily arrive.

O glorious Archangel St. Michael, watch over us during life, defend us against the assaults of the demon, assist us especially at the hour of death; obtain for us a favorable judgment, and the happiness of beholding God face to face for endless ages. Amen. 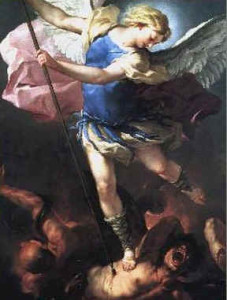 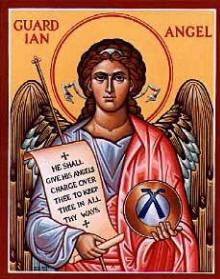 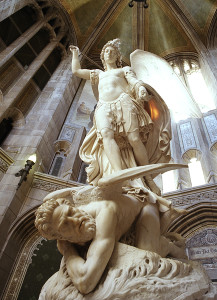 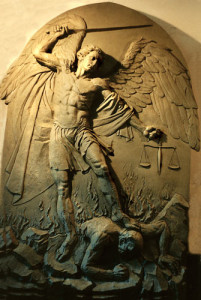