Jesus Christ Appearances After His Ascension into Heaven to today!

One of the primary arguments I have heard from non-believers in regards to Christ is the following.

Jump Straight to the Appearances

It’s a simple question…. and on the surface…. a legitimate question.   The following will help those who ask this question…. discover their own answers.

First – If one asks the question in order to eliminate the legitimacy of all religions founded by men… then so be it.  We must then eliminate all religions on this planet… except for Christianity.  Only

Christianity is claimed to be founded by The Son of God himself.   “Begotten, not made”.  One being with the father.   The first ecumenical council of Nicaea in 325 confessed in its Creed that the Son of God is “begotten, not made, of the same substance (homoousios) as the Father”. All other religions on earth have founders who are buried in the dirt.. and remain there still.

C.S. Lewis in Mere Christianity puts it thusly: “We don’t use the words begetting or begotten much in modern English, but everyone still knows what they mean. To beget is to become the father of: to create is to make. And the difference is this. When you beget, you beget something of the same kind as yourself. A man begets human babies, a beaver begets little beavers and a bird begets eggs which turn into little birds. But when you make, you make something of a different kind from yourself. A bird makes a nest, a beaver builds a dam, a man makes a wireless set—or he may make something more like himself than a wireless set: say, a statue. If he is a clever enough carver he may make a statue which is very like a man indeed. But, of course, it is not a real man; it only looks like one. It cannot breathe or think. It is not alive.”

Jesus is claimed to be both fully divine and fully human. No other religious leader can make and give evidence for this claim. Jesus was in the beginning with God (John 1:1) and is eternal and perfect. Yet Jesus was also born of a woman, lived a human life, including natural growth (Luke 2:52), emotions, and even death.  In addition, there are more than 300 prophecies in the Old testament fulfilled in and only in Jesus. The odds of such an accomplishment are so exponential as to be considered mathematically impossible. In other words, these fulfillments could be supernatural, something only possible by Jesus as God… and certainly not coincidental. 1 or 2 maybe, 300+ – not.

Second – it is documented within the Bible that Christ appeared at least 10 times between the moment of his resurrection and his ascension into Heaven to Hundreds of Witnesses.  But also consider this… 11 of the 12 Disciples (Judas not included) met horrible, painful, martyr deaths for refusing to deny the Resurrection of Christ.  Surely, under the threat and infliction of torture, any single one of them would have confessed the falsity of the Resurrection.. if it indeed had not happened. But they all maintained the Christ did indeed rise from the dead.  That he broke bread with them, continued to teach and support them and then ascended into heaven… and they died for this belief. Would you die for a lie?

If you still can’t quite buy the Resurrection of Christ, do yourself a favor and read about the Shroud of Turin as well.  The Shroud, along with the testimony of hundreds of eye witnesses in  extremely well documented, historical documents… should at least put the notion that Christ’s Resurrection might actually be true.

Third – the Resurrected Christ’s form is now very different from the Christ that walked on earth.   Through his resurrection, his human mission was complete… “it is accomplished” (John 19:30)  From that moment of his resurrection to the end of time… Jesus Christ, The Song of The Living God, would be seen in his true divine state.  His complete greatness with God, sitting at the right hand of the father.  Although Born on this earth to walk this earth as one of us… Christ returns to his original form as true Light – God himself – a divinity that we could not previously understand.  It is our belief that God himself is truly incomprehensible.  His magnitude… His greatness… is beyond our comprehension.  But God so loved the World…. that he sent his only Begotten Son – God from God… true Light from True Light…. to talk to us directly…. his most favored of creations.  He took the form of a man so that we could comprehend those things he wanted us to know… things which God himself thought so important for us to understand…  that he speaks with us directly… with no misunderstandings… through the voice of Christ.

Finally: Understanding that Christ is believed to be the Son of God… Equal with God…. You should understand that when Christ appears… he can appear in any form… anywhere… at anytime…. he so chooses.  And Christ has made many thousands of appearances since his ascension into heaven.  Below are official, approved, apparitions and visions of Jesus Christ by the Catholic Church.  The church conducted numerous scientific inquiries and investigations into these appearances, and after careful due diligence… blessed them as worthy of belief.

No other religion in the history of mankind can make claims that their God.. or the Founder of their religion is so active as the one true god… and still alive today! 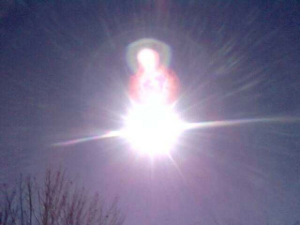 Our Lady of Lourdes

7 Comments on "Jesus Christ Appearances from Ascension to Now!"