“…A woman in white appeared above the settlement, and the rioters’ bullets were aimed at her. When the apparition did not fade, attackers had not even time to reorganize because a strange horseman put them to flight.” 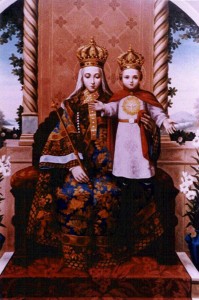 Official Authentic Photo of Our Lady of China

THE POSITION OF THE CHURCH – APPROVED BY POPE PIUS XI IN 1932  –  It is an official Catholic Church Marian Shrine.

Our Lady of China (Simplified Chinese: 中华圣母, Traditional Chinese: 中華聖母, pinyin: Zhōnghuá Shèngmǔ) is the name given to an apparition of the Blessed Virgin Mary in Donglu, China, first appearing in 1900.

The mother of Christ appeared in China showing herself as the protector and defender for helpless and the righteous.  The significance of this apparition is just being realized now… as China begins to take center stage in the Global World and Economy.

Mary hopes for a China that could become a shiny beacon of light, a nation where the family is valued, where all Life is protected and the Chinese people have the right to freely worship the great God Almighty.  China could become the hope of the world.

On the other hand, If China went down a different path – one of darkness and persecution – then God himself would send his army to protect his beloved children.

An officially-sanctioned image of Our Lady of China was blessed, granted and promulgated by Pope Pius XI in 1928, in response to the requests made by the 1924 Shanghai Synod of Bishops in China, the first national conference of bishops in the country. Following the event, Archbishop Celso Costantini, Apostolic Delegate in China, along with all the bishops of China, declared the Chinese people dedicated to Our Lady of China, using the official image. In 1941, Pope Pius XII designated the 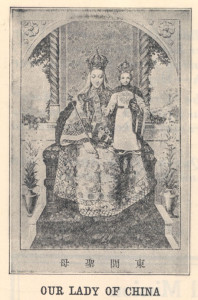 feast day as an official feast of the Catholic liturgical calendar. In 1973, following the Second Vatican Council, the Chinese Bishops conference, upon approval from the Holy See, placed the feast day on the vigil (day preceding) of Mothers Day (the second Sunday of May).

Christian devotion to Our Lady of China has been popular in Donglu.

Several churches, chapels, and pastoral centers around the world, predominantly those focused on ministry to Chinese-speaking Catholics, have adopted the name, including a mission in Washington, DC. There is a Chapel of Our Lady of China in the National Shrine of the United States in Washington, DC, established and dedicated in 2002 under the Most Rev. Michael J. Bransfield. There has been some controversy because the image used in the Chapel is not the officially approved image of Our Lady of China, but instead a different Chinese image of the Virgin Mary.

The Virgin of Sheshan is another, similar apparition which has attained like acclamation and fame among Chinese Christians.

BACKGROUND OF OUR LADY IN CHINA

Our Lady of China appeared near Peiping. It stands in a village named Tong Lu. A Poor Mission was started there by the Vincentian Fathers. It was a poor place, perhaps the poorest in the whole region, formerly called “the place of beggars.” In 1900, there were some seven hundred Christians gathered about the little hamlet. Suddenly, the famous Boxer rebellion swept China and grew to 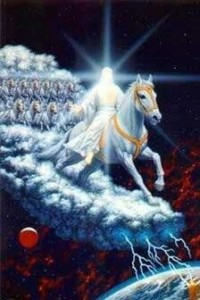 such proportions, that even small places like Tong Lu could not escape its fury. In April 1900, a force of ten thousand rioters attacked Tong Lu. The soldiers, in senseless rage, started to shoot into the sky. Then suddenly they fled, frightened, and never came back again. According to the legend, a woman in white appeared above the settlement, and the rioters’ bullets were aimed at her. When the apparition did not fade, attackers had not even time to reorganize because a strange horseman put them to flight.

Soon after they had disappeared beyond the horizon. Father Wu, a Chinese priest, confessed to his flock that he invoked the help of Mary. A new church was built on the site and Father Wu placed a picture of Our Lady on the main altar. He asked the painter to dress Our Lady in the royal robes of the dowager Empress Tzi-Hsi. The image of the Blessed Virgin in the royal robes of the pagan Empress, with the Christ Child on her knees, is vivid expression of Chinese tradition. It is a shrine of the Mother and her Son. Though her robes be pagan, she belongs to every age, to all people and to every race. As was told and promised in the Old Testament: “I am the mother of fair love, and of fear, and of knowledge and of holy hope.”

The Tong Lu church was completely destroyed recently by the Chinese Communists, but the picture of Our Lady of China remains intact because only a copy of the picture was used in the church. The original was hidden in the wall behind the copy, and this was recovered and found intact. It is now in possession of Chinese priests who carry out their activities in disguise.

As recently as May 23, 1995, Mary appeared. Over 30,000 Catholics from the unofficial Church had gathered for Mass at the Donglu Shrine, on the vigil of the Feast of Our Lady – Mary Help of Christians. There were four bishops of the unofficial Church concelebrating the Mass and nearly 100 unofficial priests standing in the open field. Suddenly, during the opening prayer and again during the consecration, the people observed the sun spinning from right to left. Light rays of various shades emanated from the sky. Participants saw Our Lady of China and the Child Jesus in the sky and also the Holy Family, the Heavenly Father, and the Holy Spirit. The phenomenon lasted approximately twenty minutes.

Continued Persecution of the Underground Church in China

Bishop JIA Zhiguo, the underground Roman Catholic bishop of Zhengding, Hebei, was arrested on March 20, 2002. Bishop JIA is 67 years old and was ordained a bishop in 1980. He was previously 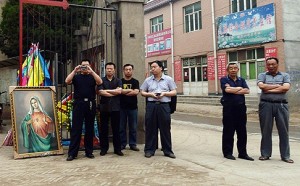 in jail for approximately 20 years. He was released shortly after our press release and has been under strict surveillance for many years….. Father PANG Yongxing, 30 years of age, was arrested in his home in December 2001. On Easter Sunday, March 31, 2002, Father MA Shunbao, 50 years of age, was arrested while he was offering Holy Mass. Father WANG Limao, 32 years of age, was arrested on Palm Sunday, March 24, 2002, also while offering Holy Mass. All three priests belong to the underground Roman Catholic Church in Baoding, Hebei. On July 7, 2002, they were sentenced to three years of labor camp for “disturbing the peace of society” under the “cult” law….. Six Roman Catholics from Wenzhou, Zhejiang went to DongLu in Baoding, Hebei for a pilgrimage in May 2002 and were arrested by the authorities. They were fined a total of JMP 30,800 (US $ 3,850) for “illegal pilgrimage.” They were released soon after the fine was paid. …..On July 18, 2002, in Dong-An village, Fujian province, 31 underground Roman Catholics, 26 of whom were students under 18 years of age, were arrested during a summer vacation catechism class in a private home. Among the 31 arrested were a Catholic nun, Sister Chen Mei, 27 years of age, and four chaperons. The children and chaperons were released after one day. The situation of Sister Chen Mei is unknown…..Bishop WEI Jingyi, 44 years of age, the underground Roman Catholic Bishop of Qiqihar, Heilongjiang, was arrested Sept 9, 2002. He was too released shortly after our press release.

According to Margaret Galitzin, Chinese Police continue to Bar Pilgrims from Honoring Our Lady in Dong Lu .
“Every year, throughout the month of May, the Chinese government sends extra police forces to lock down the village of Dong Lu in Hebei, a few hours drive from Beijing. Officers sitting in blue tents erected as checkpoints on access roads stop every car and force most travelers, including reporters, to turn back. ” – (“Police surround China village for Catholic celebration,” May 26, 2012, Times of Oman online) Their sole aim is to prevent Catholic pilgrims from participating in ceremonies to honor Our Lady of Dong Lu, also known as Our Lady of China. The village – with roughly 10,000 residents – is 90% Catholic, strongly devoted to the Virgin Mary and fiercely loyal to the Underground Catholic Church vs. the government-run Chinese Patriotic Association.

Annual “Coast to Coast” Masses for the Underground Church in China

The Cardinal Kung Foundation is promoting the celebration of an annual Mass for the persecuted underground Roman Catholic Church in China. The Foundation has chosen, as the annual date for this Mass, the Sunday before October 1, which is the National Day of the founding the People’s Republic of China and also the anniversary of Pope John Paul II’s canonization of the 120 blessed martyr saints of China

Prayer to Our Lady of China 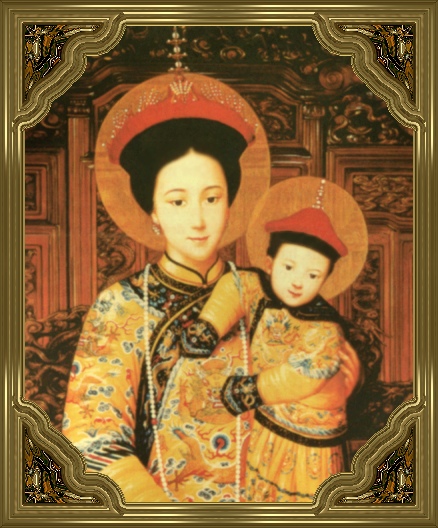 Hail, Holy Mary, Mother of Our Lord Jesus Christ,
Mother of all nations and all people.
You are the special heavenly Mother of the Chinese people.
Teach us your way of total obedience to God’s will.
Help us to live our lives true to our faith. Fill our hearts with burning love for God and each other.
Stir up in our youth an unconditional giving of self to the service of God.
We call on your powerful intercession for peace, reconciliation and unity among believers
and the conversion of the unbelievers in China and
throughout the world, for God’s mercy is our only hope.
Our Lady of China, Mother of Jesus, hear our petitions and pray for us.
Amen.

Consecration of the Chinese People to Our Lady of China

O Mary, Mother of God, our Mother, with sincere filial love, we consecrate to your most tender, most loving immaculate heart, our bodies, souls, abilities, lives, words and deeds, and all that we have. We also consecrate to you the Chinese people throughout the world. e pray that you be the Mother of priests and all missionaries. May they loyally and zealously proclaim the kingdom of God. Be the Mother of all Christians. Help them to progress in virtue and to shine forth evermore the splendor of faith. Be the Mother of all unbelievers. Deliver them from darkness and lead them into the light of Faith. We beseech you to show mercy to the imense population of Chinese descent. They hae all been redeemed by the precious blood of your Divine Son. THrough your most efficacious intercession, may theya ll take refuge in the Sacred Heart of Jesus, the Source of life and holiness, and become one fold under One Shepherd iin the Church.