Our Lady of Knock, Ireland Facts, History and Important Links 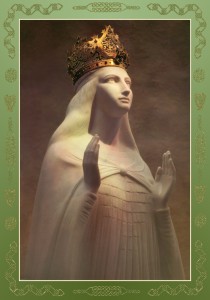 The apparition featured Mary (clothed in a long white cloak, with her eyes and hands raised upward as if in prayer), Saint Joseph (to Mary’s right, also wearing a white cloak, and looking at Mary), Saint John the Evangelist (to Mary’s left, wearing white bishop’s clothing, and holding an open book in his left hand), and, behind them and to the left, a plain altar featuring a cross, a lamb, and angels flying around the altar in adoration.

Even though no words were ever spoken at the apparition, the symbolism of the images presented were worth thousands of spoken words!

On the evening of Thursday, 21 August 1879, at about 8 o’clock, fifteen people, whose ages ranged from five years to seventy-five and included men, women, teenagers and children, witnessed what they stated was an apparition of Our Lady, Saint Joseph, and Saint John the Evangelist at the south gable end of the local small parish church, the Church of Saint John the Baptist. Behind them and a little to the left of Saint John was a plain altar. On the altar was a cross and a lamb (a traditional image of Jesus, as reflected in the religious phrase The Lamb of God) with adoring angels. The witnesses watched the Apparition in the pouring rain for two hours, reciting the Rosary. Although they themselves were saturated not a single drop of rain fell on the gable or vision. There were fifteen official witnesses to the Apparition, most of whom were from the village of Knock and surrounding areas and ranged in age from just 5 years old to 74 years old. Each of the witnesses gave testimonies to a Commission of Enquiry in October 1879. The findings of the Commission were that the testimonies were both trustworthy and satisfactory.

Place a Prayer Petition for Our Lady of Knock Now

Two women, passing by the church, first noticed it and summoned what would become a small crowd of 15. 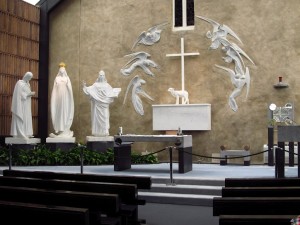 The Blessed Virgin Mary was described as being beautiful, standing a few feet above the ground. She wore a white cloak, hanging in full folds and fastened at the neck. The crown appeared of a golden brightness, of a deeper hue, than the striking whiteness of the robe she wore; the upper parts of the crown appeared to be a series of sparkles, or glittering crosses. She was described as “deep in prayer”, with her eyes raised to heaven, her hands raised to the shoulders or a little higher, the palms inclined slightly to the shoulders. Bridget Trench “went in immediately to kiss, as I thought, the feet of the Blessed Virgin; but I felt nothing in the embrace but the wall, and I wondered why I could not feel with my hands the figures which I had so plainly and so distinctly seen”.

Saint Joseph, also wearing white robes, stood on the Virgin’s right hand. His head was bent forward from the shoulders towards the Blessed Virgin. Saint John the Evangelist stood to the left of the Blessed Virgin. He was dressed in a long robe and wore a mitre. He was partly turned away from the other figures. He appeared to be preaching and he held open a large book in his left hand. To the left of St. John was an altar with a lamb on it with a cross standing on the altar behind the lamb.

Those who witnessed the apparition stood in the pouring rain for up to two hours reciting the Rosary, a series of traditional Catholic prayers. When the apparition began there was good light, but although it then became very dark, witnesses could still see the figures very clearly – they appeared to be the colour of a bright whitish light. The apparition did not flicker or move in any way. The witnesses reported that the ground around the figures remained completely dry during the apparition although the wind was blowing from the south. Afterwards, however the ground at the gable became wet and the gable dark.

Marian apparition, An ecclesiastical Commission of inquiry was established by the Archbishop of Tuam, Most Rev. Dr. John MacHale, on 8 October 1879. The Commission consisted of Irish scholar and historian, Canon Ulick Bourke, Canon James Waldron, as well as the parish priest of Ballyhaunis and Archdeacon Bartholomew Aloysius Cavanagh. Depositions of witnesses were taken in the ensuing months. The deliberations of the Commission, referred only to the occurrence on 21 August 1879, which omitted “subsequent phenomena,” and as a result, there exists no official record for events that occurred after that date.

The evidence which was the Commission’s duty to record, satisfied all the members and was deemed trustworthy. Among the considerations were whether the apparition emanated from natural causes, and whether there was any positive fraud. In the first cited particular, it was reported that no solution as from natural causes could be offered; and in the second consideration, that such a suggestion had never, even remotely, been entertained.

The Commission’s final verdict was that the testimony of all the witnesses taken as a whole is trustworthy and satisfactory. At a second Commission of inquiry in 1936, the surviving witnesses confirmed the evidence they gave to the first Commission.

The growth of railways and the appearance of local and national newspapers fueled interest in the small Mayo village. Reports of “strange occurrences in a small Irish village” were featured almost immediately in the international media, notably The Times (of London). Newspapers from as far away as Chicago sent reporters to cover the Knock phenomenon, while Queen Victoria asked her government in Dublin Castle to send her a report about the event.

A number of cures and favors are associated with visitors to Our Lady of Knock’s Shrine and those who claim to have been cured here still leave crutches and sticks at the spot where the apparition is believed to have occurred.

Each Irish diocese makes an annual pilgrimage to the Marian Shrine and the nine-day Knock novena attracts ten thousand pilgrims every August.

While the original church still stands, a new Apparition chapel with statues of Our Lady, St Joseph, the lamb and St John the Evangelist, has been built next to it. Knock Basilica is a separate building showing a tapestry of the apparition.