Lady of Sorrows @ Akita, Japan
Our Lady of All Nations and Akita 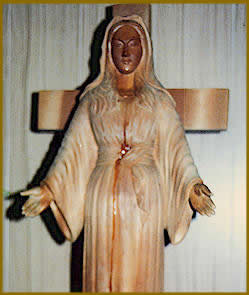 Background
In 1973, the Blessed Virgin Mary gave Sister Agnes Katsuko Sasagawa in Akita, Japan three messages through a statute of Mary. Bathed in a brilliant light, the statute became alive and spoke with a voice of indescribable beauty. Her Guardian Angel also appeared and taught her to pray. The wooden statute from which the voice came wept 101 times over a course of several years. It also perspired abundantly and the perspiration sent out a sweet perfume. Its right palm bled from a wound having the form of a cross. Hundreds of people witnessed many of these events. Scientific analysis of blood and tears from the statute provided by Professor Sagisaka of the faculty of Legal Medicine of the University of Akita confirmed that the blood, tears, and perspiration are real human tears, sweat, and blood. They come from three blood groups: O, B, and AB. Sister Agnes also has stigmata on the right palm. A Korean woman with terminal brain cancer received immediate healing while praying before the statute in 1981. The miracle was confirmed by Dr. Tong-Woo-Kim of the St. Paul Hospital in Seoul and Fr. Theisen, President of the Ecclesiastical Tribunal of the Archdiocese of Seoul. The second miracle was the complete cure of total deafness of Sister Agnes.

April, 1984 – Most Rev. John Shojiro Ito, Bishop of Niigata, Japan, after years of extensive investigation, declares the events of Akita, Japan, to be of supernatural origin, and authorises throughout the entire diocese the veneration of the Holy Mother of Akita. He said: “The message of Akita is the message of Fatima.”

June, 1988 – Vatican City – Joseph Cardinal Ratzinger, Prefect, Congregation for the Doctrine of the Faith, gives definitive judgement on the Akita events and messages as reliable and worthy of belief. 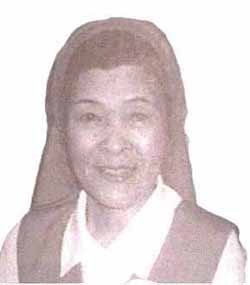 “My daughter, my novice, you have obeyed Me well in abandoning all to follow Me. Is the infirmity of your ears painful? Your deafness will be healed, be sure. Be patient. It is the last trial. Does the wound of your hand cause you to suffer? Pray in reparation for the sins of men. Each person in this community is my irreplaceable daughter. Do you say well the prayer of the Handmaids of the Eucharist? Then, let us pray it together:”

“Most Sacred Heart of Jesus, truly present in the Holy Eucharist, I consecrate my body and soul to be entirely one with Your Heart being sacrificed at every instant on all the altars of the world and giving praise to the Father, pleading for the coming of His Kingdom.”

“Please receive this humble offering of myself. Use me as You will for the glory of the Father and the salvation of souls.”

“Most Holy Mother of God. Never let me be separated from your Divine Son. Please defend and protect me as Your special child. Amen.”

” Pray very much for the Pope, the bishops and the priests.”

“It is very important. You will convey it to your superior.”

“Many men in this world afflict the Lord. I desire souls to console Him to soften the anger of the Heavenly Father. I wish, with my Son, for souls who will repair by their suffering and their poverty for the sinners and ingrates.”

“In order that the world might know His anger, the Heavenly Father is preparing to inflict a great chastisement on all mankind. With my Son, I have intervened so many times to appease the wrath of the Father. I have prevented the coming of calamities by offering Him the sufferings of the Son on the Cross, His Precious Blood, and beloved souls who console Him and form a cohort of victim souls. Prayer, penance and courageous sacrifices can soften the Father’s anger. I desire this also from your community, that it love poverty, that it sanctify itself and pray in reparation for the ingratitude and outrages of so many men. Recite the prayer of the Handmaids of the Eucharist with awareness of its meaning: put it into practice: offer (whatever God may send) in reparation for sins. Let each one endeavour, according to capacity and position, to offer herself entirely to the Lord.”

“Even in a secular institute prayer is necessary. Already souls who wish to pray are on the way to being gathered. Without attaching too much attention to the form, be faithful and fervent in prayer to console the Master.”

“. . . if men do not repent and better themselves, the Father will inflict a terrible punishment on all humanity. It will be a punishment greater than the deluge, such as one will never have seen before. Fire will fall from the sky and will wipe out a great part of humanity, the good as well as the bad, sparing neither priests nor faithful. The survivors will find themselves so desolate that they will envy the dead. The only arms which will remain for you will be the Rosary and the Sign left by my Son. Each day recite the prayers of the Rosary. With the Rosary, pray for the Pope, the bishops and the priests.”

“The work of the devil will infiltrate even into the Church in such a way that one will see cardinals opposing cardinals, bishops against other bishops. The priests who venerate me will be scorned and opposed by their confreres (other priests). Churches and altars will be sacked. The Church will be full of those who accept compromises and the demon will press many priests and consecrated souls to leave the service of the Lord.”

“The demon will be especially implacable against the souls consecrated to God. The thought of the loss of so many souls is the cause of my sadness. If sins increase in number and gravity, there will be no longer pardon for them.”

“. . . Pray very much the prayers of the Rosary. I alone am able still to save you from the calamities which approach. Those who place their confidence in me will be saved.” 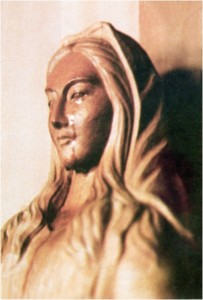 The Statue has wept 101 times

The statue of Akita has wept 101 times. Her guardian angel explained “There is a meaning to the figure 101 (the number of times the statue wept). This signifies that sin came into the world by a woman and it is also by a woman that salvation came into the world. The zero between the two signifies the Eternal God who is from all eternity until eternity. The first one represents Eve, and the last, the Virgin Mary.”

The actual weeping of the statue was not only witnessed by the local bishop but was shown on national Japanese TV.

Theresa Chun, a Korean woman diagnosed with a brain tumor, placed an image of Our Lady of Akita under her pillow and prayed to her for a miraculous healing. On August 4, 1981, the tumor was found to have disappeared. This healing was well documented by Fr. Joseph Oh of Seoul, S. Korea.

In May 1982, her angel told Agnes that her hearing would be permanently restored that month, and on May 30 the deafness was cured. (Prior to this time, tests performed on Agnes at the Akita Muncipal Hospital in 1975 had confirmed that she was deaf and that her deafness was incurable.)

The initial tests on the blood, tear and sweat samples from the statue were performed by Professor Eiji Okuhara, a physician in the Akita University Department of Biochemistry and a former Rockefeller Foundation fellow. Doctor and Professor Okuhara, who had himself witnessed the weeping statue also forwarded the samples to a non-christian forensic specialist, Dr. Kaoru Sagisaka. Both scientists, independently confirmed that the samples tested 100% positive to be of human origin- blood was Type B and the Sweat and Tears were Type AB.

Most Reverend John Shojiro Ito of Niigata, who on April 22, 1984, after years of extensive investigation, declared the tears to be of supernatural origin and authorized veneration of the Holy Mother of Akita.  “After the inquiries conducted up to the present day, one cannot deny the supernatural character of a series of unexplainable events relative to the statue of the Virgin honored at Akita (Diocese of 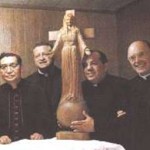 Niigata). Consequently I authorize that all of the diocese entrusted to me venerate the Holy Mother of Akita.”

Bishop John Shoojiroo Ito of Niigata (April 22, 1984)
Bishop Ito was apprehensive over the reaction of the Vatican to his pastoral letter, but when he brought his letter to Joseph Cardinal Ratzinger — now Pope Benedict XVI — in 1988, the cardinal, who was initially disinclined toward the revelation, allowed the pastoral letter and its dissemination to the faithful.