OUR LADY OF THE MIRACULOUS MEDAL

“Rue du Bac”
THE POSITION OF THE CHURCH – APPROVED

On June 6 the Lord appeared to the young (age 24) Daughter of Charity novice Catherine at Mass, and again on the nights of July 18-19 when she was summoned to the chapel by a “child clothed in white” to converse with the Virgin Mary. Catherine was told prophecies and charged with “a mission” that manifested itself on November 27 in an early morning (5:30am) appearance of the Blessed Virgin who was “clothed in white” standing on a globe and “a serpent.” Rays of light issued forth from rings on her fingers and Catherine was told to commission a medal of what she was seeing. Then, turning the letter “M surmounted by a bar and a cross” underneath which were the hearts of Jesus and Mary all surrounded by the words “O Mary, conceived without sin, pray for us who have recourse to thee.”

On the eve of the Feast of Saint Vincent de Paul, July 19, the Sister Superior spoke to the novices about the virtues of their Holy Founder and gave each of them a piece of cloth from his surplice. Catherine earnestly prayed to Saint Vincent that she might with her own eyes see the mother of God.
She was convinced that she would see the Blessed Virgin Mary that very night; and in her conviction, Catherine fell asleep. Before long, she was awakened by a brilliant light and the voice of a child. “Sister Laboure, come to the Chapel; the Blessed Virgin awaits you.”

Catherine replied: “We shall be discovered.”

The little child smiled, “Do not be uneasy; it is half past eleven, everyone is sleeping… come, I am waiting for you.” She rose quickly and dressed. The hall lights were burning. The locked chapel door swung open at the angel’s touch. Amazed, Catherine found the Chapel ablaze with lights as if prepared for midnight Mass. Quickly she knelt at the communion rail, and suddenly, she heard the rustle of a silk dress… the Blessed Virgin, in a blaze of glory, sat in the director’s chair. The angel whispered: “The Blessed Mother wishes to speak with you.”

Catherine rose, knelt beside the Blessed Mother and rested her hands in the Virgin’s lap. Mary said:

“God wishes to charge you with a mission. You will be contradicted, but do not fear; you will have the grace to do what is necessary. Tell your spiritual director all that passes within you. Times are evil in France and in the world.”

A pain crossed the Virgin’s face.

“Come to the foot of the altar. Graces will be shed on all, great and little, especially upon those who seek for them. You will have the protection of God and Saint Vincent. I always will have my eyes upon you. There will be much persecution. The cross will be treated with contempt. It will be hurled to the ground and blood will flow.” Then after speaking for some time, the Lady like a fading shadow was gone.

Led by the child, Catherine left the Chapel, marched up the corridor, and returned to her place in the dormitory. The angel disappeared and as Catherine went to bed she heard the clock strike two.

Catherine lived the normal life of a novice of the Daughters of Charity until Advent. On Saturday, November 27, 1830, at 5:30 p.m., she retired to the Chapel with the other Sisters for evening meditation. Catherine heard the faint swish of silk… she recognized our Lady’s signal. Raising her eyes to the main altar, she saw her beautiful Lady standing on a large globe.
The Virgin spoke, this time giving a direct order: “Have a medal struck as I have shown you. All who wear it will receive great graces.”

Catherine asked how she was to have the medal struck. Mary replied that she was to go to her confessor, a Father Jean Marie Aladel saying of this saintly priest: “He is my servant.” Father Aladel at first did not believe Catherine; however after two years, he finally went to the archbishop who ordered two thousand medals struck on June 20, 1832. When Catherine received her share of these first medals from the hands of the priest she said: “Now it must be propagated.”

The spread of a devotion to the medal urged by Saint Catherine was carried out so swiftly that it was miraculous itself.

We might expect that praise and prominence would be the lot of one so favored by heaven. But she sought none of it; rather, she fled from it. She wanted 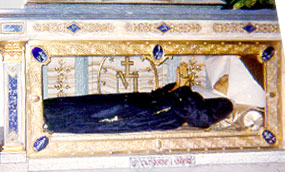 to be left alone to carry out her humble duties as a Daughter of Charity. For over forty years, she spent her every effort in caring for the aged and infirm, not revealing to those about her that she had been the recipient of our Lady’s medal. The Sisters with whom she lived held her in the highest esteem, and each one longed to be her companion.

In 1876, Catherine felt a spiritual conviction that she would die before the end of the year. Mary Immaculate gave Catherine leave to speak, to break the silence of forty-six years. To her Sister Superior, Catherine revealed the fact that she was the sister to whom the Blessed Mother appeared. On the last day of December, 1876, Saint Catherine passed on – once again to the hands of Mary – this time, however, in heaven. Today her beautiful remains still lie fresh and serene.

When her body was exhumed in 1933 it was found as fresh as the day it was buried. Though she had lived seventy years and was in the grave for fifty-seven years, her eyes remained very blue and beautiful; and in death her arms and legs were as supple as if she were asleep. Her incorrupt body is encased in glass beneath the side altar at 140 Rue du Bac, Paris, beneath one of the spots where our Lady appeared to her.

In the Chapel of the Apparition you can gaze upon the face and the lips that for forty-six years kept a secret which has since shaken the world.

Our Lady’s Messages and Prophecies

July 19: “Sorrows will befall France…” with “victims among the clergy of Paris” (including the Archbishop) in forty years.
Forty years later on July 19, 1870 the Franco-Prussian War began which resulted in the siege of Paris with horror, famine and and the Paris Commune which killed the Archbishop and many other clergy.

November 27: “These (gems on fingers with rays of light) are the symbols of the graces I shed upon those who ask for them. The gems from which rays do not fall are the graces for which souls forget to ask.”

When her body was exhumed in 1933 it was found as fresh as the day it was buried. Though she had lived seventy years and was in the grave for fifty-seven years, her eyes remained very blue and beautiful; and in death her arms and legs were as supple as if she were asleep. Her incorrupt body is encased in glass beneath the side altar at 140 Rue du Bac, Paris, beneath one of the spots where our Lady appeared to her.

The Meaning of the Front Side of the Miraculous Medal

Mary is standing upon a globe, crushing the head of a serpent beneath her foot. She stands upon the globe, as the Queen of Heaven and Earth. Her feet crush the serpent to proclaim Satan and all his followers are helpless before her (Gn 3:15). The year of 1830 on the Miraculous Medal is the year the Blessed Mother gave the design of the Miraculous Medal to Saint Catherine Labour. The reference to Mary conceived without sin supports the dogma of the Immaculate Conception of Mary not to be confused with the virgin birth of Jesus, and referring to Mary’s sinlessness, full of grace and blessed among women (Luke 1:28) that was proclaimed 24 years later in 1854.
The Meaning of the Back Side of the Miraculous Medal

The twelve stars can refer to the Apostles, who represent the entire Church as it surrounds Mary. They also recall the vision of Saint John, writer of the Book of Revelation (12:1), in which a great sign appeared in heaven, a woman clothed with the sun, and the moon under her feet, and on her head a crown of 12 stars. The cross can symbolize Christ and our redemption, with the bar under the cross a sign of the earth. The ‘M’ stands for Mary, and the interleaving of her initial and the cross shows Mary’s close involvement with Jesus and our world. In this we see Mary’s part in our salvation and her role as mother of the Church. The two hearts represent the love of Jesus and Mary for us. (See also Lk 2:35).

Read the Latest Testimonies regarding true experiences from the Miraculous Medal

From 1832-36 is it estimated that over 10 million medals were minted in France in an attempt to meet the demand of the people for them: Catherine’s director Fr. Aladel writes a book detailing the numerous healings, conversions and other miracles. There have been countless miracles associated with what was originally called the Medal of the Immaculate Conception, which accounts for the popular name for it today (‘Miraculous’). Here are a few noted examples:
~ 1832: Napoleon-appointed, unrepentant ‘archbishop’ of Paris suddenly repents when the Medal was brought in his home Napoleon’s unrepentant ‘archbishop’ of Belgium suddenly repents when the Medal was brought in his home
~ 1841: Jewish banker Alphonse Ratisbonne accepts a dare to wear the medal and say the Memorare, later seeing a vision of Mary, converting to the faith and becoming a missionary to his fellow Jews
~ 1933: St. Catherine’s body was exhumed for in the cause of her sainthood and found to be incorrupt, as it remains so today as a witness to the authenticity of her ‘mission’
~ 1944: American prisoner Claude Newman picks up a discarded Medal, has a vision of Mary and is converted at the time of his execution
~ 1947: the Grand Master of the Polish Masonic Lodges, Stempowski, is given a medal to carry by St. Maximillian Kolbe. Newspapers reported his deathbed conversion to the faith with credit given to the Medal