“Fatima is the key Marian apparition of the Twentieth Century. Pope Pius XII noted that the message of Fatima is one of the greatest interventions of God through Mary in world history since the death of the Apostles. Only in the name of God does the Blessed Mother intervene. She does not say a word, does not take a step without the explicit will of God. The message of Fatima cannot be understood if you do not know atheistic communism, if you do not know what happened in Russia.”

THE POSITION OF THE CHURCH – APPROVED 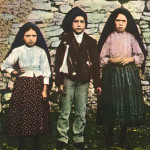 On 13 May 1917, three children were pasturing their little flock in the Cova da Iria, parish of Fatima, town of Vila Nova de Ourém. today the diocese of Leiria-Fatima. They were called: Lucia de Jesus, aged 10, and her cousins Francisco and Jacinta Marto, aged 9 and 7.About midday, after praying the Rosary, as was their custom, they were amusing themselves building a little house of stones scattered around he place where the Basilica now stands. Suddenly they saw a brilliant light, and thinking it to be lightning, they decided to go home. But as they went down the slope another flash lit up the place, and they saw on the top of a holmoak (where the Chapel of Apparitions now stands), “a Lady more brilliant than the sun”, from whose hands hung a white rosary.The Lady told the three little shepherds that it was necessary to pray much, and she invited them to return to the Cova da Iria during five consecutive months, on the 13th day at that hour. The children did so and the 13th day of June, July, September and October, the Lady appeared to them again and spoke to them in the Cova da 0a. 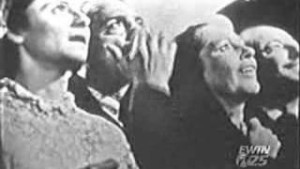 Bystanders Witnessing Miracle of the Sun

On the 19th of August, the apparition took place at Valinhos, about 500 meters from Aljustrel, because on the 13th the children had been carried off by the local Administrator to Vila Nova de Ourém. At the last apparition, on October 13, with about 70,000 people present, the Lady said to them that she was the “Lady of the Rosary” and that a chapel was to be built there in her honor. After the apparition all present witnessed the miracle promised to 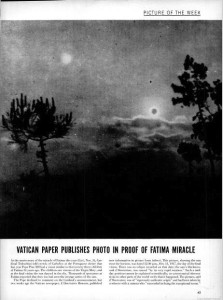 the three children in July and September :the sun, resembling a silver disc, could be gazed at without difficulty and, whirling on itself like a wheel of fire, it seemed about to fall upon the earth. Afterwards, when Lucia was a Religious Sister of Saint Dorothy, Our Lady appeared to her again in Spain (10 December 1925 and 15 February 1926, in the Convent of Pontevedra, and on the night of 13/14 June 1929, in the Convent of Tuy), requesting the devotion of the five first Saturdays (to pray the Rosary, meditate on the mysteries of the Rosary, confess and receive Holy Communion, in reparation for the sins committed against the Immaculate Heart of Mary), and the Consecration of Russia to the same Immaculate Heart, This request had been announced by the Apparition on 13 July 1917, in what is called the Secret of Fatima”. Years later, Sr. Lucia related that, between April and October of 1916, an Angel had appeared to the three seers on three occasions, twice in the Cabeço and once at the well in the garden behind Lucia´s house, who exhorted them to prayer and penance.

Since 1917 pilgrims have not ceased to come to the Cova da Iria in thousands upon thousands from all parts of the world, at first on the 13th of each month. later during the summer and winter holidays, and now more and more at weekends and any day all the year round.

The Secrets of Fatima:

The Prophecies provided at Fatima serve merely as a reminder to people of what they already know – but try to deny. God is Great, God Made Us, Sin is bad, Sin brings us away from God. If we continue to Sin and offend God – there will be consequences. The detail of the prophecies and their historical accuracy should serve as a wakeup call to us all —

On July 14, in 1972, the international Pilgrim Virgin Statue Our Lady of Fatima cried in New Orleans.

The First Secret of Fatima :

A Brief Vision of Hell to remind us that Hell is real.
“Our Lady showed us a great sea of fire which seemed to be under the earth. Plunged in this fire were demons and souls in human form, like transparent burning embers, all blackened or burnished bronze, floating about in the conflagration, now raised into the air by the flames that issued from within themselves together with great clouds of smoke, now falling back on every side like sparks in a huge fire, without weight or equilibrium, and amid shrieks and groans of pain and despair, which horrified us and made us tremble with fear.

The demons could be distinguished by their terrifying and repulsive likeness to frightful and unknown animals, all black and transparent. This vision lasted but an instant. How can we ever be grateful enough to our kind heavenly Mother, who had already prepared us by promising, in the first Apparition, to take us to heaven. Otherwise, I think we would have died of fear and terror.”

The Second Secret of Fatima:

The creation of the Soviet Union and the persecution of the Church in Eastern Europe.

“You have seen hell where the souls of poor sinners go. To save them, God wishes to establish in the world devotion to my Immaculate Heart. If what I say to you is done, many souls will be saved and there will be peace. The war is going to end: but if people do not cease offending God, a worse one will break out during the Pontificate of Pius XI. When you see a night illuminated by an unknown light, know that this is the great sign given you by God that he is about to punish the world for its crimes, by means of war, famine, and persecutions of the Church and of the Holy Father. To prevent this, I shall come to ask for the consecration of Russia to my Immaculate Heart, and the Communion of reparation on the First Saturdays. If my requests are heeded, Russia will be converted, and there will be peace; if not, she will spread her errors throughout the world, causing wars and persecutions of the Church. The good will be martyred; the Holy Father will have much to suffer; various nations will be annihilated. In the end, my Immaculate Heart will triumph. The Holy Father will consecrate Russia to me, and she shall be converted, and a period of peace will be granted to the world.”

The Third Secret of Fatima: 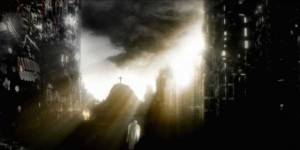 An outright attack on the Catholic Church and its leaders.
“After the two parts which I have already explained, at the left of Our Lady and a little above, we saw an Angel with a flaming sword in his left hand; flashing, it gave out flames that looked as though they would set the world on fire; but they died out in contact with the splendor that Our Lady radiated towards him from her right hand: pointing to the earth with his right hand, the Angel cried out in a loud voice: ‘Penance, Penance, Penance!’ And we saw in an immense light that is God: ‘something similar to how people appear in a mirror when they pass in front of it’ a Bishop dressed in White ‘we had the impression that it was the Holy Father’. Other Bishops, Priests, Religious men and women going up a steep mountain, at the top of which there was a big Cross of rough-hewn trunks as of a cork-tree with the bark; before reaching there the Holy Father passed through a big city half in ruins and half trembling with halting step, afflicted with pain and sorrow, he prayed for the souls of the corpses he met on his way; having reached the top of the mountain, on his knees at the foot of the big Cross he was killed by a group of soldiers who fired bullets and arrows at him, and in the same way there died one after another the other Bishops, Priests, Religious men and women, and various lay people of different ranks and positions. Beneath the two arms of the Cross there were two Angels each with a crystal aspersorium in his hand, in which they gathered up the blood of the Martyrs and with it sprinkled the souls that were making their way to God”