November 1, 2007 11:38PM EST
“You have seen hell where the souls of poor sinners go. To save them, God wishes to establish in the world devotion to my Immaculate Heart. If what I say to you is done, many souls will be saved and there will be peace. The war is going to end; but if people do not cease offending God, a worse one will break out during the pontificate of Pius XI. When you see a night illumined by an unknown light, know that this is the great sign given you by God that he is about to punish the world for its crimes, by means of war, famine, and persecutions of the Church and of the Holy Father” Message from Mary given July 13, 1917 at Fatima.

On the night of January 25, 1938, Sister Lucia stood at her convent window and saw an ominous red glow that lit the entire sky. This light was seen throughout Europe and Africa and in part of America 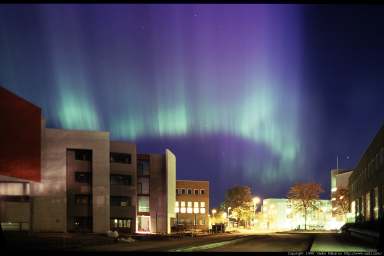 and Asia. Scientists tried to explain it as a most unusual display of the Aurora Borealis, or Northern Lights. But Sister Lucia knew that it was the great sign foretold by Our Lady on July 13, 1917, and that the punishment of the world was at hand. Several Weeks later, Hitler invaded Austria, World War II had begun.

There is an uneasy stillness in the air this evening as I feel compelled to write this.  I learned along time ago to do “what the spirit moves me to do”.  The dreams of upheaval are intensifying.

A series of events have been set in motion, which if left unaided, will cause tremendous hardship and tragedy.

The message from 90 years ago, becomes NEW today.

“When you see a night illumined by an unknown light, know that this is the great sign given you by God that he is about to punish the world for its crimes, by means of war, famine, and persecutions of the Church and of the Holy Father.”

This is the warning, the warning of November.  Know that the hour draws near.  The period of peace is ending.

Pray – Pray – Pray.  With faith, mountains can be moved and wars can be prevented. Prayer can save the living, bring life to the dead and move the father.

Walk in the path of righteousness and virtue.  Act kindly, make your daily life a living prayer.  Be like Christ.

The Warning of November is upon us.

Be the first to comment on "Warning of November"