Many People, especially Atheists, use the existence of Evil… as an argument against the existence of God.   In order to Defend the Cross, you must be able to answer the question… “If God does exist… and is all powerful, why doesn’t he just destroy Satan and Evil? Why was the devil given so much power at the cost of so much damage, so many lives and souls lost? Why doesn’t God simply put an end to him… so none of his children would get hurt?”

It’s that ancient question that has haunted man since the dawn of time —-
Why Does Evil Exist?

The simple answer is “God gave man Free Will… and if he intervened … would we really have Free Will?

But I think I need to take the answer a bit further… to help those who are asking the question… find peace with the Answer.

God is the creator of all things… he created the Universe, the Angels, the creatures… and mankind. The bible states clearly that God was not satisfied with his creation until he created man… in his image.
And because he loved Mankind… above all other of his creation, he planned from the moment of the creation of mankind… the future incarnation of himself… as a man.

Because of this, there was a rebellion in heaven with some Angel’s who resented this. Led by Lucifer, The Angel of Light, the rebellion was quickly crushed by a fellow Angel, St. Michael… and Satan was cast out of the kingdom of heaven… to dwell in the shadow of heaven… forever.

So we must remember… God created Everything.  That means he created the Angels… including Lucifer and St. Michael.  It appears, that not only did he give mankind Free Will… but also the Angels.

You must also never forget… Satan is not equal to God.  You must understand completely… Lucifer (Satan) is not a God.  He was stripped of his power and his light.  He is merely another creation of God…. an Influencer… who was a bit upset that mankind was elevated to a higher status before God… than he and the other angels.  Lucifer is like that spoiled child who did not get their way and decided to try and burn down the house.  He was cast out of the House… kicking and screaming…but allowed to live… for God still saw a purpose for him. (We will address this at a later date)

Now let’s say, for sake of argument, that God simply gave the command… and Satan and Evil simply were destroyed… and now ceased to exist. God could simply say the word… and he would be gone.  But what would our World look like today? Indeed, we would have peace… but we would also be like machines.
Everyone just like the other.

All outcomes… from all Actions… would be expected and always the same.
And in reality… free will would no longer be in effect.. because the only choice we could make… would be the right choice… wrong choices… and their consequences would no longer be an option. No more bad decisions could be made by us. The flaws that makes us Human… would be gone.

At that point, would we really still be made in God’s image? If God could still make choices… and decisions… and we could not… what would we be?

We would be like the trees that simply live… making no decisions…blooming and then die.

But God did give us Free Will… and established a natural order to The Universe, The Laws of Science… and to mankind.  In his world… actions have consequences… and for every action.. there is an equal and opposite reaction.

Evil exists… so that a true, genuine, Goodness can exist!

Without Evil, Man would not be able to rise up and prove himself as a worthy child of the Great God Almighty.  Free will allows a man to become a greater creation to God… to evolve and grow in a way that gives Glory to God out of Love and Kindness.

When there is an evil act that is committed — there is a greater act of goodness that can occur… and prove itself superior to the evil act.

And it is that Goodness… that courageous act of selflessness… that purifies a man’s soul and makes them worthy to enter the Kingdom of God.

For it is these acts… these selfless acts of Love… that brings the greatest pleasure to the God, our father… because it was done… under Free Will.

It is a love that is a Genuine Love.

Think about it God can have anything he wants…anything…. except for one thing. Your Love for him. It is the only thing you can give him that he can not create or take.

He can only have it if you give it to him.

And what better Love, what more genuine love…. than a love born out of love…. not fear… not anguish… not selfishness. It is for the creation of this Love that everything happens around us.

For what we consider important here on earth is not important in the annals of time or the universe.
This day shall pass like the thousands of days before it.

What will not pass is what you do today, in your show of love for him.

So to answer your question… 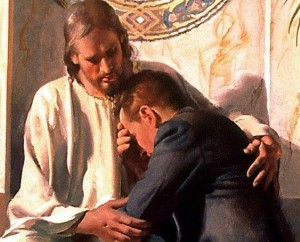 God permits the evil, the temptations and the tortures so that we can continue to evolve the human spirit and love to a level that is greater than when we were first made.  And in the end when we breathe our final breathes we will enter into a place where evil simply ceases to exist… The house of God himself and we will finally understand.

Be the first to comment on "Why Does Evil Exist?"