In the previous article “Proving that God Exists”, we proved the existence of an entity known as “God.”  In order to prove that Jesus Christ is God, we must answer the next question… Why did God create us?

Totally incomprehensible to us… a being of intelligence with no beginning… no end…. so great and powerful that he created the Universe and everything in it.  This great God established the universe to be governed by scientific laws, mathematical formulas and rules that govern how things operate, live and die… the cycles of life and death.  He established natural rules and laws surrounding all of his creations.

And yet… because you exist… and all things are created by God… either actively or passively… You must serve a purpose in his creation!
So what was his purpose in creating us? 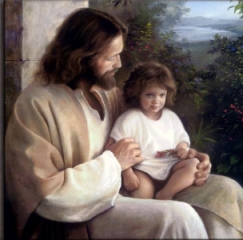 Unlike all of his creation… Man is different… he is unique.   Rocks… can not make themselves move.  Dogs can not build buildings or even imagine the concept.  Mankind was created with no threatening claws, no protective coverings, no strength of bears or elephants… Man was created naked… no fur… no aggressive teeth… vulnerable to every other creation God invented.  How could he possibly survive? But God gave man the ability to think… and most importantly…  To Choose.  Free Will.   (The only other entity who has that power… was God himself. ) Thus, God made man in his image.

Man is the only creation capable of true thought, taking those thoughts and translating them into actions… and then living his life freely choosing what to do and what not to do.  So why would God create man differently?  The Bible says that God created the heavens, the Earth… The light from the Darkness… and all of the creation within his creation… yet was not satisfied. Something was missing. God desired to share his creation with another…

It is only thru the creation of Free Will – That Love could be created!

You see, Love is the only object… out of all of creation that must be freely given. One can not force love upon another… it must be freely given… and received. And what is Love?  In the words of St. Paul, “Love is patient, love is kind. It does not envy, it does not boast, it is not proud.  It does not dishonor others, it is not self-seeking, it is not easily angered, it keeps no record of wrongs.  Love does not delight in evil but rejoices with the truth.  It always protects, always trusts, always hopes, always perseveres.   Love never fails.”  It is important to remember that Love is part of the spiritual nature of God.  And only Man… was created in his image.  Thus… a Turtle can not love another Turtle. A Rock can not love a Tree.  Man is capable of Love… because he is free to think… free to act… Free to Love. Love is not part of the physical universe that God created… but rather the spiritual universe in which we also live.

And thus God’s plan was perfect! He created a creature that was capable of choosing for themselves what they would love… and what they would not love. With the creation of man… came uncertainty…. a wild card in the Creation of the Universe. Whereas everything else was governed by scientific and mathematical principals and laws… Man was “unpredictable”.   And thus being unpredictable… a creation with free will…. A genuine Love was now possible. Not a love out of necessity… or convenience… or even fear. But a genuine love… a true Love… that God was seeking… was now possible.

And God loved us back… and thru his other creations… he would invoke a spirit of awe and wonder within Man. In in the breathtaking beauty of the universe he created… and the simplicity of the world that God created for Man… he could inspire Man… he could speak to Man thru the quietness of the times… and have Man… fall genuinely in Love with him.  A love as strong as a mother embracing her newborn child…. a father… lovingly protecting his family.  We not only inherited the image of God… but we inherited the heart of God and his Infinite Love that makes anything possible.

But as Man began to create… his own creations… he also created noise… and distractions… and thru the ages… began to drift away from God.
So this great god… this Almighty God… this truly Incomprehensible God made the decision to speak to his beloved creation… in another form that was understandable to Man… Another Man.

Be the first to comment on "Why Did God Create You?"