The Kearns, Utah “bleeding host” was not a miracle according to the Catholic Diocese of Salt Lake City. 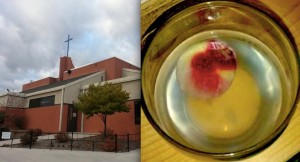 December 16, 2016:  The Salt Lake City Diocese took the host and appointed a committee to look into the incident.
The head of the committee, Monsignor M. Francis Mannion, issued this statement Wednesday on the conclusion of the investigation:

The work of an investigative committee proceeded as follows:
At Saint Francis Xavier Church in Kearns, Utah, on the weekend of November 14-15 of 2015, it was alleged that a host consecrated a week earlier at the 1:30 p.m. Mass on November 8 appeared to be bleeding. The host was publicly displayed at the Parish Masses. In the wake of the excitement generated by the premature and imprudent public display and veneration of the host, an ad hoc committee to investigate the matter was appointed on November 19, 2015 by the Administrator of the Diocese of Salt Lake City, Monsignor Colin F. Bircumshaw. This ad hoc committee included individuals with expertise in Catholic theology, canon law, molecular biology and ministry.

The committee took into careful consideration all the events as reported by Reverend Eugenio Yarce, Pastor at Saint Francis Xavier Church in Kearns, Utah, and the numerous narratives offered by parishioners. A crucial element of these events was the fact that the host in question was left unprotected and unattended in a dish of water from approximately November 8 – 14, 2015.

In an expeditious but careful manner the committee enlisted the services of a competent and credible scientist to conduct controlled testing of the host. Great care was taken to ensure the reverent handling of the consecrated host throughout the scientific examination. Upon completion of the prescribed tests, the scientist, with the assistance of a blind observer, concluded that the observed change in the host could be satisfactorily and conclusively explained by natural causes, namely the growth of what is commonly known as “red bread mold,” or red bacteria, most likely Neurospora cressa or Serratia marcescens.

Due to the public display of the host, a number of reports, complete with digital photographs and videos, rapidly began circulating in both the local and national media. Predictably, these reports led to rash speculation about what caused the change in the color of the host.

In the history of the Church, by Divine Providence, miracles have taken place. The sole purpose of a miracle is to bring about good. False claims of miracles, on the other hand, cause harm to the faithful and damage the Church’s credibility. While not dismissing the possibility of miracles, understanding the potential harm of hastily jumping to conclusions should cause all the faithful, lay and clergy alike, to act with great prudence. The guidance of competent ecclesiastical authority is required when confronted with phenomena like that reported from Saint Francis Xavier Parish last month.

The Church presumes that most situations appearing to be extraordinary phenomena are actually the result of natural causes. This is why the Church sets the evidentiary bar for proving a miracle quite high. In such matters the Church undertakes a thorough and unprejudiced examination of events that may appear to be miraculous. If, after a thorough investigation, the specific phenomenon can be satisfactorily and conclusively explained in natural terms, then a directly supernatural cause is ruled out. The alleged “bleeding host” from Saint Francis Xavier Parish is explained as a natural phenomenon.

After a thorough investigation, the ad hoc committee unanimously concludes that the observed change in the host was not miraculous but resulted from the growth of red bread mold. In addition, the ad hoc committee determined the need to establish proper protocols for clergy dealing with such situations in the future. Catholics should take this opportunity to renew their faith and devotion in the great miracle of the Real Presence which takes place at every Eucharist.

Free Will, God, Jesus, Proof of God, Science and God

Why Did God Create You?