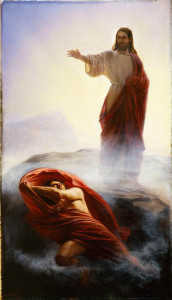 Those angelic betrayers are now among us—spiritual beings so corrupt that they saw the very face of God, and yet still chose to betray Him, likely because of an intense jealousy of mankind. God, after all, made us in His image, and loves us dearly. And these angels who betrayed the God of the universe because of their jealousy of man were cast down to earth—with us.

What could be more terrifying? We are faced with a celestial foe that harbors no end of ill will toward mankind, an enemy that we cannot see or hear or touch, but who can affect us nonetheless. What can we possibly do in the face of this?

It is this question I took to Fr. Gary Thomas, mandated exorcist for the Diocese of San Jose, California….” From By Wesley Baines, Interview with an Exorcist.